Dear America series is comprised of historical fiction books written in the form of a diary of a young woman's life during an important event or time period in American history. Teachers-- These books are ideal for supplementing American History lesson plans. The interest level of the books ranges widely, anywhere from fourth grade and up. However, most are in the 5th grade to 7th grade range. 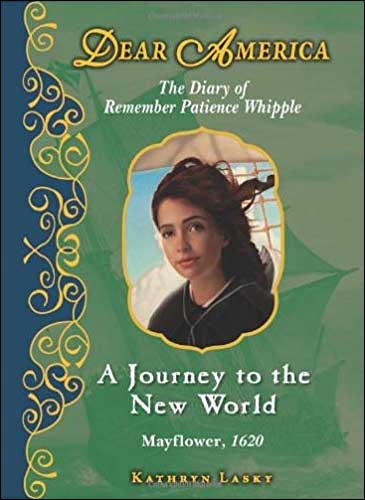 A Journey to the New World, Mayflower 1620
The Diary of Remember Patience Whipple by Kathryn Lasky

An 'eye-witness account' of the dangerous and miserable voyage of the Mayflower--a cargo ship!--via fictional journal entries of one of the children on board. Readers also learn about what awaited the group in the new world, which was almost as bad! This title "demonstrates how vigorous historical fiction can enliven the facts found in most textbooks." (Kirkus Reviews) 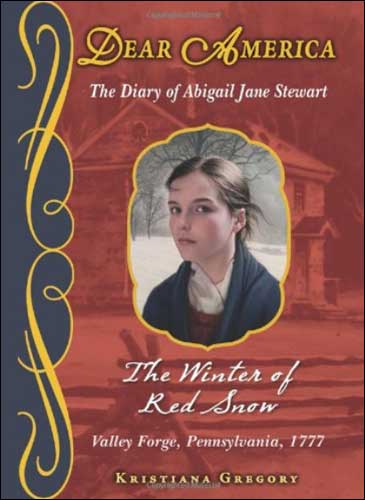 The Winter of the Red Snow: Valley Forge, Pennsylvania, 1777
The Diary of Abigail Jane Stewart
by Kristiana Gregory

Recounts the hardships at Valley Forge through the eyes of 11-year-old Abby, whose family lives near the encampment. She records her emotions toward the soldiers--curiosity, pity, anger, and revulsion-- as well as daily chores, amusements, trials, and worries. The overall tone is positive, she doesn't neglect the downside of army life (disease, desertion...) or the horrors of war. (SLJ) 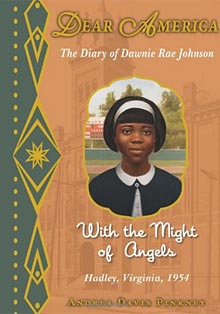 With the Might of Angels: Hadley, Virginia, 1954
The Diary of Dawnie Rae Johnson
by Andrea Pinkney 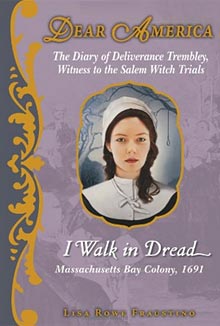 I Walk in Dread: Massachusetts Bay Colony, 1961
Diary of Deliverance Trembly
Witness to the Salem Witch Trials
by Lisa Fraustino

Deliverance Trembley spends each day caring for her sick sister and carrying out her daily chores, always wary of upsetting her hot-tempered uncle. When four girls in her Salem, Massachusetts village start to accuse some village women of being witches, quiet Deliverance at first believes them, until someone she knows and trusts is accused. Then she's not so sure anymore. 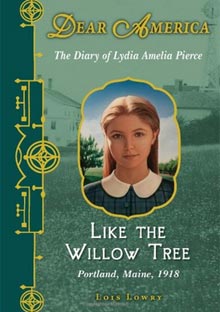 Like the Willow Tree: Portland, Maine 1918
The Diary of Lydia Amelia Pierce
by Lois Lowry 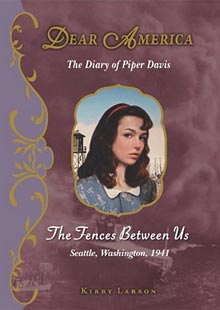 The Fences Between Us, Seattle, Washington, 1941
The Diary of Piper Davis  by Kirby Larson 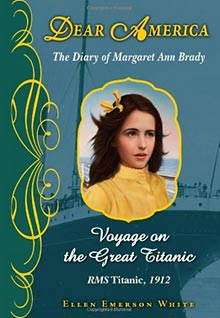 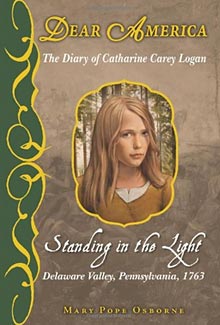 This Dear America educates readers on Quaker and Lenape Indian beliefs and cultures though the journal entries of a young Quaker girl named Caty, who is captured from her 18th century Pennsylvania home by Lenape Indians. Through living with her captors, she comes to understand their culture and beliefs, and when she is eventually rescued, she has a hard time adjusting back to Quaker life. 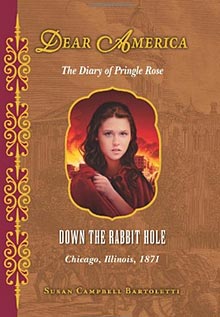 Down the Rabbit Hole, Chicago, Illinois, 1871
The Diary of Pringle Rose
by Susan Campbell Bartoletti

We're working on this summary... coming soon
Click here to learn more about this book 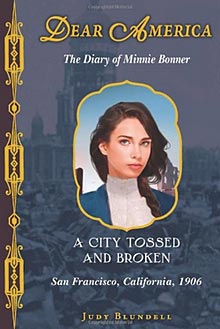 A City Tossed and Broken, San Francisco, CA 1906
The Diary of Minnie Bonner
by Judy Blundell 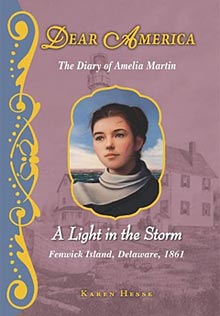 A Light in the Storm, Fenwick Island, Delaware, 1861
The Civil War Diary of Amelia Martin
by Karen Hesse 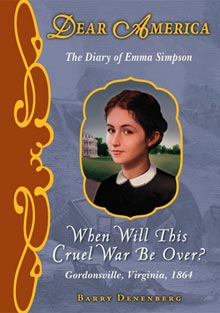 When Will This Cruel War Be Over? Gordonsville, Virginia, 1864
The Diary of Emma Simpson
by Barry Dennenberg 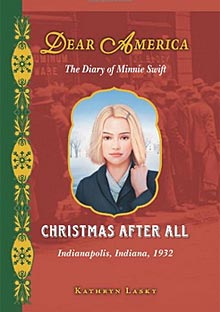 Christmas After All, Indianapolis, 1932
The Diary of Minnie Swift
by Kathryn Lasky

Everything has changed because of the Depression, and Minnie, 11, isn't looking forward to Christmas. She writes in her diary about her family's struggles, about daily life during the Great Depression, and about the little orphan girl who comes to live with them. Far from depressing, Minnie's irrepressible spirit keeps the tone upbeat and the numerous period details really help bring the 1930s to life. 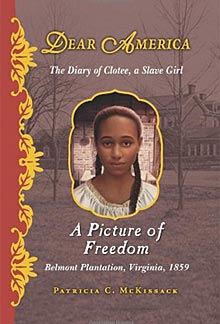 A Picture of Freedom, Belmont Plantation, Virginia, 1859
The Diary of Clotee, a Slave Girl
by Patricia McKissack 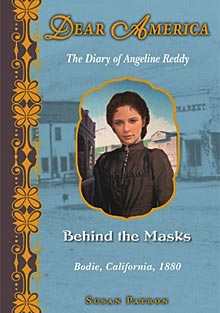 Behind the Masks: Bodie, California, 1880
The Diary of Angeline Reedy
by Susan Patron 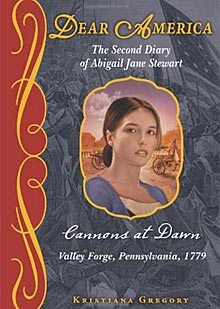 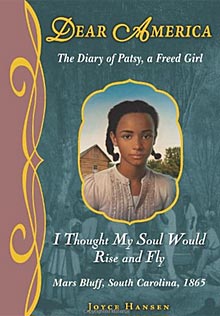 I Thought My Soul Would Rise and Fly, Mars Bluff, South Carolina, 1865
The Diary of Patsy, a Freed Girl
by Joyce Hansen 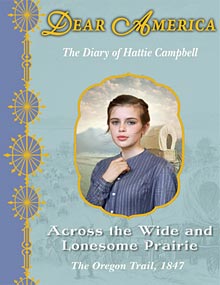 Across the Wide and Lonesome Prairie: Oregon Trail, 1847
The Diary of Hattie Campbell
by Kristiana Gregory 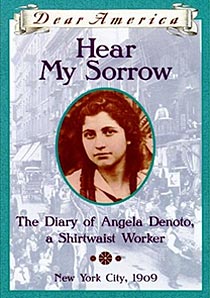 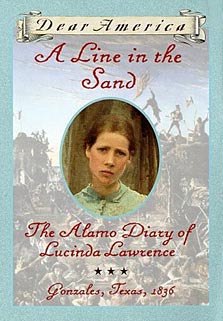 A Line in the Sand: Gonzales, Texas
The Alamo Diary of Lucinda Lawrence
by

In this Dear America diary, thirteen-year-old Lucinda Lawrence recounts the story of the Texas Revolution. Important incidents, such as the Battle of San Jacinto, come to life with the girl's description of how they affected her family. Carefully researched and historically accurate details add interest and give a clear picture of the hard- ships and simple joys of early Texas life. Her diary also becomes a way for her to express excitement of a teen crush, sadness over the deaths of family members, and disgust and disappointment over the horrors of war. -SLJ

A Time for Courage
The Suffragette Diary of Kathleen Bowen
by

Love Thy Neighbor
The Tory Diary of Prudence Emerson

Valley of the Moon
The Diary of Maria
by

One Eye Laughing, the Other Weeping
The Diary of Julie Weiss
by

A Line in the Sand
The Alamo Diary of Lucinda Lawrence, 1836
by

Grace uses her journal to tell about a year in the town of Dalhart, Texas, during the Dust Bowl year of 1935. She elaborates on her life at home and school, writing about the tiny joys and the daily struggles of life. (Note: This book was written by a 15 year old girl who won a writing contest and was given the opportunity to write this novel. Fantastic!)

Mirror, Mirror on the Wall
The Diary of Bess Brennan, Perkins School
for the Blind
by

Land of the Buffalo Bones
The Diary of An English Girl in Minnesota, 1873
by

A Coal Miner's Bride
The Diary of Anetka Kaminska, Pennsylvania, 1896
by

Plucky, Anetka, age 13, is struggling to care for the three children of her late husband, who as killed in a coal mining accident. The unsafe working conditions in the mine are an important part of the story, as are the efforts of laborers to bring about change. How will Anetka survive and will she find a new love? (Includes the Lattimer Massacre, where racism led to violence and 19 men were killed.)

Color Me Dark
The Diary Nellie...The Great Migration North
by

Look to the Hills
The Diary of Lozette Moreau, a French Slave

Where Have All the Flowers Gone
The Diary of Molly Mackenzie Flaherty, 1968
by

Molly's brother is off fighting in Viet Nam, and Mary doesn't know how she feels about it. She describes her feelings and opinions in this poignant diary, telling how the war affects her and her family, how sad it is at the VA hospital where she volunteers, and about other things that are going on (hippies, anti-war demonstrations, assassinations of Dr. King and Robert Kennedy, coffeehouses...)

The Girl Who Chased Away Sorrow
The Diary of a Navajo Girl, 1863
by

Seeds of Hope
The Gold Rush Diary of Susanna Fairchild
by
Susanna is 14 when her family takes a ship from New York to Oregon to try for good fortune, but when her mother is lost at sea, her father takes the family on a detour and heads instead to the gold fields of California. The daily struggles in the lawless mining camps are described by Susanna in her diary, as well as sorrow for the loss of her mother and love for her living family--her 'real' wealth.

So Far from Home
The Diary of Mary Driscoll, an Irish Mill Girl
by 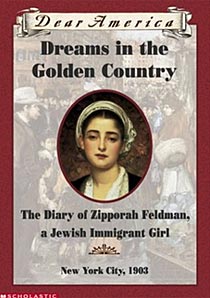 Dreams of the Golden County
The Diary of...a Jewish Immigrant Girl, 1903
by

* Santa Fe Trail *  Set in 1848, this Dear America title tells the story of 12-year-old Florrie and her family, who are traveling along the Santa Fe trail. In her journal, Florrie records her sadness at leaving her life and friends behind, and the hardships they encounter en route (mired in mud, animal encounters...) But she meets new friends along the way and has many new adventures. In their review, SLJ said "The writing is excellent" and called it "a solid purchase."

The Great Railroad Race
The Diary of Libby West, 1868
by

Betsy, Cindy, and Virginia (the teachers/sisters behind this website) 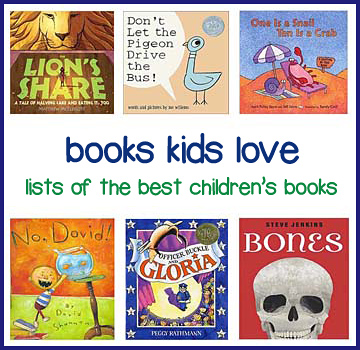